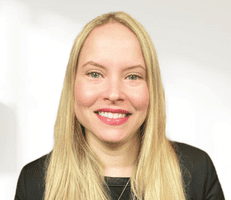 Dr. Mayté Accornero received her DMD Dental Degree from the University of Puerto Rico in 2004. After dental school, she completed a general practice residency program in Brooklyn, NY where she served as Chief Resident. She then moved to Apex, NC where she practiced general dentistry.
“Dr. A” moved to New York to complete an orthodontic residency program at the NYU Langone Medical Center in Brooklyn, NY after 14 years as a general dentist. During her residency she served as Chief Resident and received many accolades including the Program Director’s Award for her contribution toward the academic, educational, and administrative processes in the program.
Dr. Accornero is an active member of the American Association of Orthodontists (AAO), American Academy of Pediatric Dentistry (AAPD), Southern Association of Orthodontists (SAO), and the American Dental Association (ADA).
She speaks Spanish fluently and is happy to return home to North Carolina after two years away for orthodontic training. When not practicing orthodontics, she enjoys music, reading, going to the beach.